Rare materials from Yeshiva University’s Special Collections are presented in the Digital Library, with the goals of enhancing research and teaching at the University and of benefiting scholars worldwide.

Rabbi Majrim (Meir) Hillel Rappaport, the Bialystoker Maggid, was born in Brisk and received semicha (rabbinic ordination) from Rav Soloveitchik of Brisk. He moved to Bialystok, where he was the official preacher the Bialystoker Shtot-Maggid, for fourteen years. Family members report that when the Bialystoker Maggid visited Warsaw to speak, all the Jewish stores closed in order to enable everyone to hear him.

Rabbi Rappaport arrived in America in 1928. He served as the first rabbi of the Beth HaMedrosh HaGadol in New Haven, CT, and then moved to Washington Heights, New York, where he was the rabbi of the Bais HaMedrosh HaGadol of Washington Heights for many years. He was best known by his title, the Bialystoker Maggid, and was popularly known as the king of darshanim (preachers), in the tradition of the great preachers of yore. He delivered his sermons in the manner of the Eastern European maggid, characterized by its niggun: its melody, rhythm, cadence, and emotional, intense, chanting. The language of the speeches was Yiddish, mixed with traditional Hebrew phrases and Biblical quotations. He “gave” musar, moral instruction, and exhorted his audiences to repent and strive for greater religious observance. His speeches included anecdotes and parables laced with humor and spiritual insight. He became well known to the public through his radio appeals for yeshivas and other charitable institutions on New York radio stations. It is estimated that he gave thousands of speeches for a million Jews over the course of his life. He was also a masterful shaliach tsibur (prayer leader); synagogues and hotels drew crowds when he led prayers on the Sabbath and holidays.

Rabbi Rappaport moved to the Bialystoker Home for the Aged on the Lower East Side, after he was severely injured in a car accident. He died on May 5, 1963, at age 94. He was eulogized by Rabbi Moshe Feinstein, among others, at a large funeral.

This speech was probably delivered at a wedding or sheva brachot between 1945 and 1948. Rabbi Rappaport praises the parents of the newlywed couple for giving their children a Jewish education. He criticizes American Jews who do not provide their children with a Jewish education, since they believe that this will prevent their children from succeeding in American society. He mentions the concentration camps and stresses the need for a Jewish homeland in Eretz Israel, and concludes with the need for the Messiah.

We wish to thank Ronald Finegold, donor of the recording, and Sally Kirsch and Blossom Scheinfeld, granddaughters of Rabbi Rappaport, who provided biographical information and photographs. 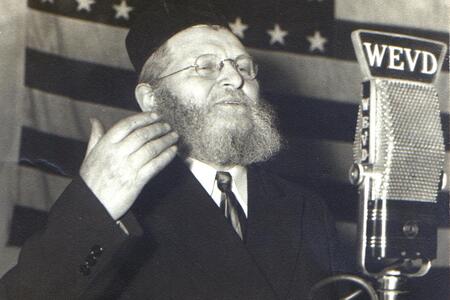 The Cantorial manuscripts, mostly dating from the early 20th century, include music for solo and choral compositions for weekdays, Sabbath and holiday services, weddings and other occasions. The manuscripts are associated with twenty individual cantors from Europe and the United States. It was not always possible to ascertain whether the cantors were the composers, compilers or transcribers of the musical works. Anonymous compositions comprise more than half the Collection. In addition, the Collection includes a minimal amount of printed material, such as sheet music (some in Yiddish), booklets and a poster. The manuscripts are generally in Hebrew and in romanized Hebrew; some are in bound volumes and others are loose leaves.

The manuscripts were transferred to the Yeshiva University Archives from the University’s Philip and Sarah Belz School of Jewish Music. Cantor Noah Schall worked on the manuscripts, created tables of contents for many of them, and provided additional information about them for this project. 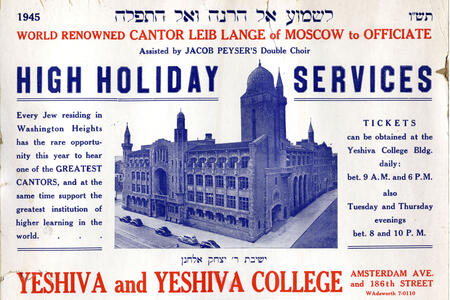 The manuscripts in this collection span more than half a century, from 1951 to 2004, and include almost all of the sermons delivered by Rabbi Norman Lamm during his years in the rabbinate. These are full sermons, as he delivered them, unedited for publication, in typescript or handwritten format.

THIS COLLECTION CAN BE VIEWED THROUGH THE LAMM SERMONS WEB PORTAL BY CLICKING HERE. 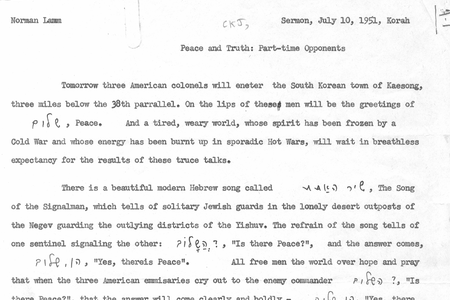 From Dream to Reality: Albert Einstein College of Medicine [film]

A film on the creation, naming, and history of Yeshiva University’s Albert Einstein College of Medicine (1953-1973) and University President Dr. Samuel Belkin’s role in founding the school. The film includes footage of Albert Einstein at a press conference in 1953 announcing that the new medical school will bear his name.

The film was originally created for viewing in Yad Samuel Belkin, an exhibit and memorial to Dr. Belkin, which was dedicated December 2, 1979. Yad Belkin is located on the second floor of the Mendel Gottesman Library.  Mrs. Abby Belkin thanks Abraham Allen, Hiram Brown, and Henry Paticoff for their help with the film in the acknowledgments in the program booklet for the dedication of Yad Belkin. 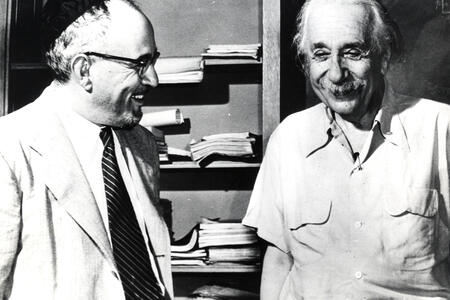 The Henry Morais Papers is made up of incoming correspondence of this rabbi and journalist, son of the prominent Jewish leader Sabato Morais. It consists of over 2000 items from more than 600 correspondents documenting Jewish religious, communal and intellectual life in the late 19th and early 20th centuries. 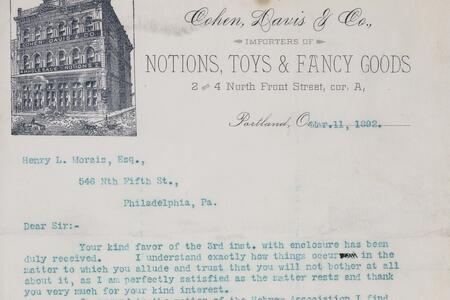 Synagogue bulletins provide a valuable window into the mission, philosophy and activities of their parent organizations, as well as into the local community in which the synagogues function. They feature minutes of synagogue meetings, summaries of club and committee activities, news and opinion pieces on Jewish and community issues, and sermon excerpts and seasonal and holiday essays from clergy. They also contain brief public service announcements, event notices and local advertisements.

Bulletins of the following synagogues are included:

This collection of fully-searchable bulletins published by Modern Orthodox synagogues in New York City has been assembled from records held by Yeshiva University Archives. More information about these synagogues can be found in the guide to their records in the Archives’ Finding Aids Database.

This digital collection was supported in part by funds from the Metropolitan New York Library Council (METRO) through the New York State Regional Bibliographic Databases Program. 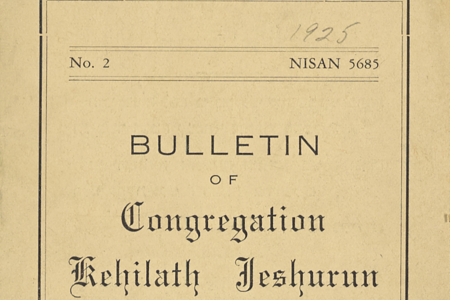 This collection consists of lectures, speeches, and shiurim delivered by Rabbi Dr. Norman Lamm prior to and during his years as President of Yeshiva University.

Rabbi Lamm received semikhah from the Rabbi Isaac Elchanan Theological Seminary in 1951 and a Ph.D. in Jewish philosophy from the Bernard Revel Graduate School of Jewish Studies in 1966.

Rabbi Lamm was the spiritual leader of The Jewish Center in Manhattan from 1958 to 1976. He became president of Yeshiva University in August 1976, and served in that capacity until 2003. During the 17 years preceding his election as president, Dr. Lamm served on the Yeshiva University faculty, culminating in his appointment as the Erna and Jakob Michael Professor of Jewish Philosophy in 1966.

Technical note: These files were digitized from reel to reel tapes and cassettes. The recordings vary in sound quality and there are occasional gaps.

Helpful Links to Other Pages 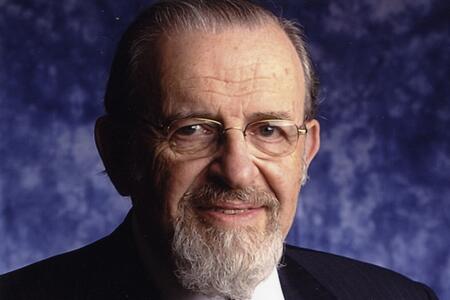 Shrines of Judaism in Curaçao [film]

A film from 1954 documenting the Jewish community in Curaçao, including the Mikveh Israel synagogue, the oldest synagogue in the Western Hemisphere, founded in 1654. 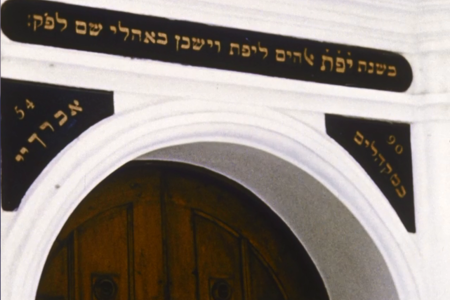 The Soviet Jewry Oral History Project was initiated by Glenn Richter, former National Coordinator of the Student Struggle for Soviet Jewry, in conjunction with Yeshiva University Archives to collect and preserve the memories of various activists in the Soviet Jewry movement. Funding for the project was provided by Henry Gerber.

The Soviet Jewry movement was formed in order to oppose the persecution of Soviet Jews and promote their right to emigrate freely from the Soviet Union. Beginning in the 1960s, largely as local grassroots efforts organized by individuals who drew their inspiration from the American civil rights movement, it grew to a worldwide effort that also included numerous established Jewish as well as some non-Jewish organizations and had the support of large numbers of government officials. It lasted well into the 1990s when the Soviet Union allowed Jews to emigrate and eventually dissolved into independent republics. 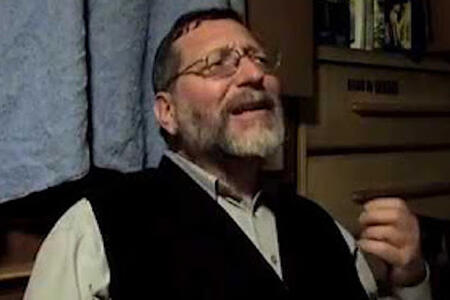 This collection consists of 177 posters from the Student Struggle for Soviet Jewry (SSSJ) Records. Founded in 1964 by Jacob Birnbaum, SSSJ was a pioneer in the movement to oppose the persecution of Jews in the Soviet Union. Birnbaum believed a grass-roots organization of college students who came of age during the Civil Rights movement in the United States were more likely than their elders to engage in the tactics of open protest and civil disobedience. This cause eventually became a mainstream, worldwide movement, considered the most effective advocacy campaign by American Jewry in the 20th century, lasting until the dissolution of the Soviet Union in 1991 and resulting in the emigration of over a million Soviet Jews.

In addition to copies of printed posters that served as publicity for the organization and its mission, this collection contains a large number of unique, hand drawn placards used by participants at protests and rallies in support of Soviet Jewry.

SSSJ viewed its mission in a historic context and invoked biblical imagery and language to dramatize its goals, which the posters reflect. Its mantra “Let my People Go” drew a direct connection between its campaign and the Biblical account of the Exodus from Egypt, from which the phrase was taken. The posters also document specific events that occurred and initiatives undertaken during the campaign, such as the Leningrad Trials, summits between Presidents Reagan and Gorbachev, and linking U.S.-Soviet trade policy with freedom for Soviet Jewry. Many of the posters spotlight individual “refuseniks”, Soviet Jews who were refused exit visas, and then typically lost their jobs and were subjected to prison and internment in Soviet forced labor camps. The collection also includes posters from various other Soviet Jewry advocacy organizations that are contained in the SSSJ Records, and some that protest Arab violence and terrorism against Israel, which, in light of Soviet financial and political support for Arab countries, was viewed as part of the broader anti-Semitic policies of the Soviet Union.

This poster collection is part of the SSSJ Records held at Yeshiva University Archives. The finding aid for the parent collection, which contains over 250 linear feet of photographs, printed material, case files of Soviet Jews, administrative records, and audio and video recordings, can be found in Yeshiva’s Finding Aids Database. 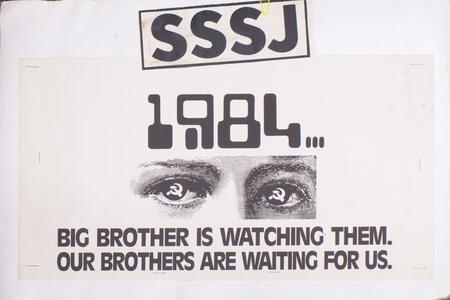 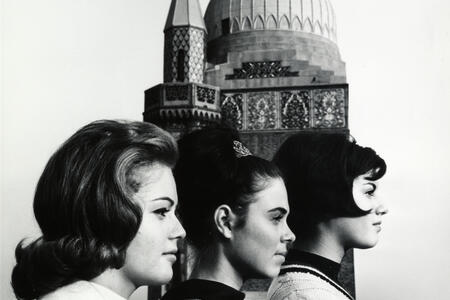 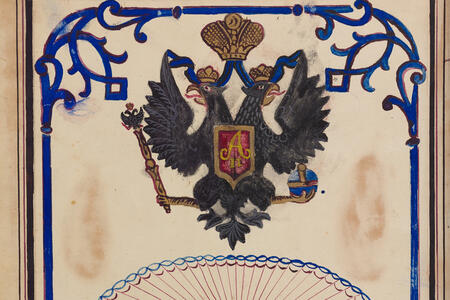